Its official, after years of anticipation the Ferrari Dino or Baby Ferrari F149 is here and it has been worth the wait. Only limited details about the new California, as it will be called have been released to date. The California will be V8 powered despite speculation of a V6 propelling the baby Ferrari. The engine will be an all new 4.3 liter V8 engine, which is the same size as the engine in the current F430. This new engine will feature direct injection and a flat crankshaft, power is said to be around 450 at 7,500 rpm, which would make it marginally less powerful then its bigger brother the F430 but more fuel efficient and easer on the sky thanks to reduced C02 emissions. Option reductions limit customers to only a 7 speed dual clutch transmission. Performance has not been sacrificed with 0-60 mph run said to be accomplished in under 4 seconds. The California will only be available as a hard-top convertible, which is a departure from Ferrari’s traditional canvas soft-top. Pricing is expected to be in the realm of Porsche 911, Aston Martin V8 Vantage, Mercedes Benz SL class with which it will co. More info will be available right here when the 2009 Ferrari California is reviled at the Paris Auto Show. 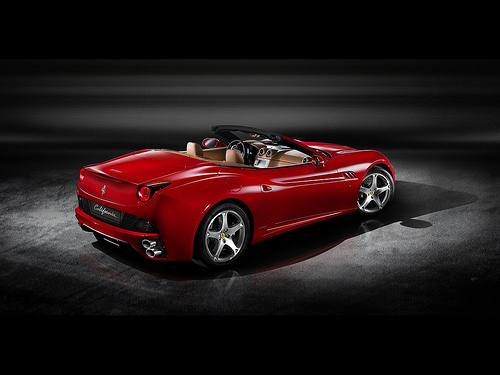 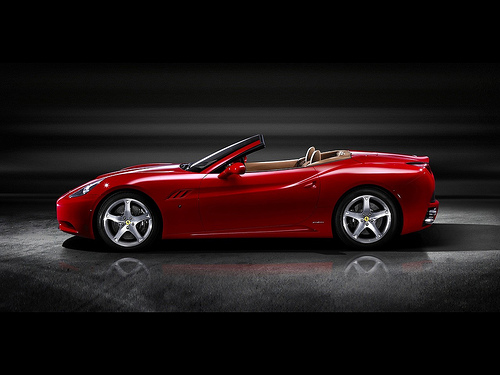 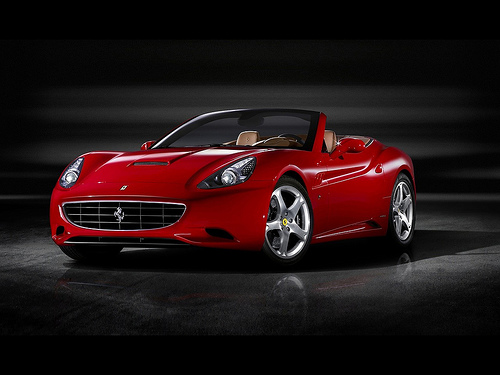 Maranello, May 13th 2008 — The first official photographs have been published of the Ferrari California, the latest addition to the new generation of Ferraris launched in 2004 with the 612 Scaglietti and added to more recently with the 430 Scuderia. The Ferrari California joins the Prancing Horse’s 8-cylinder family which has always been defined by power and performance. It also flanks the flagship 612 Scaglietti in the prestige sporty Grand Tourer segment. The new Ferrari California will satisfy even the most demanding of owners in term of its superb vehicle dynamics and driving pleasure. The new model will be available exclusively as a convertible with a folding hard top. Both chassis and bodywork are aluminium, in line with the rest of the current range. The California will be powered by a new V8 engine mounted for the first time in the marque’s history in the mid-front position. In line with Ferrari tradition, the new model also features several innovations. Apart from its folding hard top, these include the original 2+ concept which guarantees exceptional versatility of use in the rear of the car. The California’s 4,300 cc V8 engine features direct fuel injection and a “flat” crankshaft. It generates 460 CV at 7,500 rpm with a torque curve that enhances vehicle dynamics and provides maximum driving pleasure which is typical for Ferrari. As per the traditional Ferrari transaxle layout, the engine, which allows the Ferrari California to sprint from 0 to 100 km/h in less than 4.0 seconds, will be coupled to a 7-speed dual clutch transmission that boosts the car’s performance while enhancing the driving pleasure, improves ride comfort and reduces fuel consumption and emissions (c.310 g/km CO2). The comfort is further enhanced by a new multilink rear suspension system. The Ferrari California is also equipped with the exclusive F1-Trac traction control system which made its debut on the 599 GTB Fiorano and has been further honed to suit the typical driving conditions expected for this new GT. Brembo brakes featuring carbon-ceramic material disks as standard guarantee superbly efficient braking. In addition to sporting the marque’s classic styling cues, the cabin has also been beautifully trimmed using quality materials by Ferrari’s own skilled artisans. New accessories and equipment, such as the seats, steering wheel, instrument panel and infotainment system, together with optimised aerodynamics ensure that this is a highly ergonomic and enjoyable car to drive regardless of whether the top is up or down. The Ferrari California is aimed at owners who desire a car which embodies everything the Prancing Horse represents in terms of sporty design and innovation, but also seek a car with greater versatility than ever. The car will be officially unveiled to the public at the Paris International Car Show. However, over the coming weeks, new photographs and further details about it will also be published.